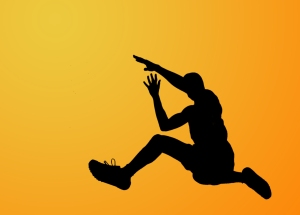 One of the classic track and field events in the Olympic Games is the long jump, but this is a relatively new name for what used to be known as the broad jump.  The name change was made in the 1960s, and had nothing to do with the nature of the athletic feat itself. This was strictly a case of political correctness. To begin at the beginning:

The first modern Olympics, held in Athens in 1896, included a standing broad jump and a running broad jump. (They also featured a standing high jump as opposed to a running high jump. The standing versions of both events were dropped from the Games after the fourth Olympiad in 1912.) Back then almost everyone in the English-speaking world would have described a running jump of this sort as being broad, not long. For example, reporting on an international, intercollegiate track meet in 1895 between Oxford and Yale universities, a British publication, Outing, An Illustrated Monthly Magazine of Recreation, summed up Oxford’s victory, saying, “Oxford won all the runs, the high hurdle, and tied in the high jump with Yale, losing only the weights and the broad jump.”

Trouble already loomed on the linguistic horizon, however. In the early twentieth century, broad began to be used in American slang as an insulting term for a woman, specifically, a prostitute or, more generally, any loose, vulgar, lower-class female. Early examples of the word’s use in such contexts, starting from 1911 in J. E. Lighter’s monumental but sadly unfinished Historical Dictionary of American Slang, suggest that the array of feminine meanings arose in New York City. But no one can be certain about this or about why women were disparaged with this particular word. It could be that the slang term evolved from one of broad’s standard secondary meanings (outspoken, coarse, vulgar). Another possibility is that it came from a shortening of  one of the phrases in which the word commonly appears, such as broad-minded or broad-beamed (as a ship). The simplest explanation, and most likely the correct one, is that the slang term reflects the fact that women tend to be broad in the hips.

In time, the meaning of broad was broadened, so to speak, to include any woman, and not necessarily in a demeaning sense, as in Oscar Hammerstein’s lyric in South Pacific (1949) about the adorable Honey Bun: “Where she is narrow, she is narrow as an arrow, Where she is broad, she is broad where a broad should be broad.”  And Bette Midler casually applied the term to herself in her 1980 book, A View from a Broad.

Still, polite people in polite circles have tended to steer away from broad. And those circles obviously included the U. S. Olympic Committee, which converted broad jump to long jump. The change can be tracked in various reference works. For example, The Encyclopedia Britannica Book of the Year for 1966 lists winners over the years for the “broad (long) jump,” while the 1967 edition describes this event simply as the “long jump.” No more broad. Meanwhile, the 1968 edition of the World Almanac and Book of Facts lists winners of the “running broad jump” for men and of the “broad jump” for women, but the 1969 edition changes the name of this event for both sexes to “long jump.”

A member of the Olympic Committee admitted to Robert W. Creamer that “We changed it [the name of the event] because of the connotation.” Creamer, a friend as well as a leading sportswriter (he was an editor of Sports Illustrated and also the author of Stengel: His Life and Times and other books), continued in a letter to me: “He [the committee member] went on to point out that in French and Italian and so on it was called the ‘long jump’ and the shot put is a ‘throw,’ so the shifting of just one uniquely English term implies an overprotective concern for the niceties.”

The “overprotective concern” probably was inspired by the increasing participation of women in sports as well as the fear that use of the word broad in television broadcasts of track and field events would offend someone somewhere. Whatever, if you consult Wikipedia for information on the broad jump today, you’ll find that it is filed under long jump.

A minor casualty of this name change is that many younger people, who have heard only of the long jump, might not get the point of the old vaudeville, or music hall, routine:

Q. Can you do the broad jump?

A. You show me the broad, and I’ll make her jump.

8 thoughts on “The Triumph of the Long Jump”