At the beginning of the month I wrote about words and phrases connected with being quiet. In this post, I’ll be looking at the opposite: how to talk about noise.

First, a word about the common adjectives loud and noisy. Although loud noises can of course be annoying, the word ‘loud’ is itself neutral. ‘Noisy’ on the other hand, almost always implies that a sound is unreasonable or annoying:

We were told to listen for three loud blasts of the horn.

The carriage was full of noisy children.

There are several nouns for noisy situations, all of which have negative connotations. Din and racket are slightly informal words for annoying loud noises that continue for a long time. More formally, a loud jumble of (usually unpleasant) sounds is sometimes described as a cacophony.

Stop making such a din!

The police helicopter was making a terrible racket.

We were greeted by a cacophony of screeching parrots.

We sometimes call the noise of many people talking or shouting at once a clamour (UK) / clamor (US). Something that is thunderous is very loud and continues for a long time. It is often used to describe applause:

We woke to the clamour of protestors in the street outside.

We sat inside, listening to the thunderous rain.

Very loud noises can be described as ear-splitting or deafening. An ear-piercing sound is also very loud and usually high-pitched. If you have a sound such as music at the loudest possible level, we say it is on (at) full blast:

Suddenly, there was an ear-splitting explosion.

There was a deafening roar of gunfire.

An ear-piercing scream rang out.

They had the TV on full blast all night.

He demanded food in a strident voice.

She shouted at him in shrill tones.

His booming laugh rang out.

There are several verbs for speaking or shouting loudly. Screech means to shout in an unpleasant, high-pitched way, while roar means to make a deep, loud sound like a lion. Howl means to shout or cry out loudly. It is often used in contexts of anger or pain. We also say that people howl/roar with laughter:

I screeched at him to move quickly.

He roared abuse at us.

His jokes made us howl with laughter.

Finally, if we are in a situation where there is a lot of noise, we often say, in a slightly informal and humorous way, I can’t/I can hardly hear myself think:

There was so much noise, I could hardly hear myself think.

18 thoughts on “I can’t hear myself think: more interesting ways of saying ‘noisy’” 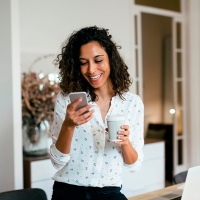