It’s that time again, when publishers reveal the word or words that they believe encapsulate the year. As many readers will know from previous years, we like to base our word on what our millions of users worldwide have been looking up over the course of the year. And what a year it’s been: in June, the United Kingdom voted to leave the European Union, causing great uncertainty in the UK and across Europe (even now, the only certainty we have is that Brexit means Brexit); then, in November, after a vicious and divisive campaign, the people of the United States elected businessman Donald Trump as President ahead of politician Hillary Clinton, in one of the most extraordinary political stories of modern times. Add to this the ongoing backdrop of a bloody civil war in Syria, several terrorist attacks around the world and numerous celebrity deaths, and there can be no denying that it has been an eventful and worrying year.

As ever, global events are reflected in the words you look up on our site. So what single word has had the biggest increase in searches over the whole year? Ladies and gentlemen, the Cambridge Dictionary Word of the Year for 2016 is . . . paranoid.

Why paranoid? Searches have risen hugely this year, over four times more than in 2015. We cannot, of course, know exactly why users are searching for a particular word, but it suggests perhaps a feeling that the institutions that have kept us safe can no longer be trusted, that the world feels more uncertain than it did a year ago. When we look at other words that have shown similar increases, we can build a fuller picture: anxiety, chaos; a feeling that societies are breaking down; increases in prejudice, bigotry and bullying; and people feeling nostalgic for what are perceived as simpler times.

But perhaps it’s not all doom and gloom: another word that has seen a big increase in searches is adorable – maybe our users are comforting themselves with videos of cute animals, and trying to think happier thoughts?

35 thoughts on “Cambridge Dictionary’s Word of the Year 2016” 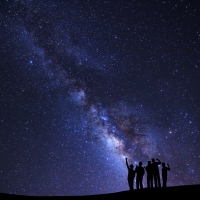